They move and they drive us — they frighten and they enlighten. They give shape to the way we embody the world. As such they can carry a much stronger emotional charge than what our abstract concepts could ever hope to achieve. They will become psychic facts — real forces to be reckoned with. In the rest of the essay I want to explain how I experienced this power of a symbol. I want to share the story of a dream and how it moved me. 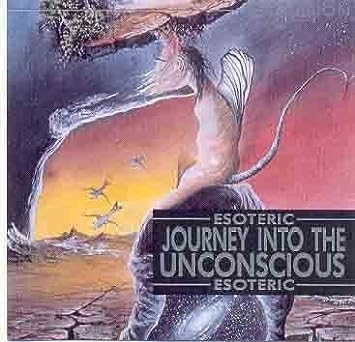 It begins one night, deep in the jungle of Guatemala. I was still not used to sleeping in my hammock, and it had begun to rain in the night. Not just the normal showers that we are used to in Europe, but a massive tropical downpour cascading down with raindrops heavy as lead. The shower created a dramatic — almost apocalyptic — atmosphere in the night, as it plunged down on the thin tin roof of our wooden abode, sounding like one long and continuous roar from above. As I was lying there in my hammock — half awake, half dreamy — it felt as if something momentous was in the air, waiting to reveal itself.

As I closed my eyes and gave in to the atmosphere, a dream of mine suddenly resurfaced. Many months before embarking upon my journey I had a very vivid dream, where I saw myself lying dead on the floor. Vividly realizing that I had died, a surge of great remorse and nostalgia flowed forth in my being. Yet it was not all sad and gloomy. Even though there was grief connected to the image, joy was hiding behind it.

The Rabbit Hole: A Young Woman’s Journey into the Unconscious

My death was actually something to be honored and celebrated. At the end of the dream my dead corpse was replaced with a baby, surrounded by three women. I had no idea what the three women were doing there, but it was clear to me that new life had been born — and it carried a soft radiance with it. As I was laying there in my hammock in the middle of the night recalling my dream, it suddenly dawned on me.

My trip is not about cacao. My trip is simply about dying!

Who do you think you are? I too am an irrational creature, immersed in a rich undergrowth of hidden drives and obscure symbols. And seen from this subterranean point of view my story looks quite different. Through the world of the unconscious we inherit a vast pool of collective imagery. As he writes in Man and His Symbols :. It can no more be a product without history than is the body in which it exists. This immensely old psyche forms the basis of our mind, just as much as the structure of our body is based on the general anatomical pattern of the mammal.

The trained eye of the anatomist or the biologist finds many traces of this original pattern in our bodies. That is why they can so easily grip, not just an individual, but also a culture at large. And when they do, they not only give rise to personal bias and complexes, but to whole mythologies, religions and philosophies. As such, they can shape the character of entire nations and epochs of history.

The archetypes become a mental therapy for the sufferings and anxieties of a culture at large; socially ingrained ways of coping with the hardships of life. The myth of the hero — often involving the act of a death and rebirth — is certainly no exception. For millennia it has given rise to hope and fears, joys and sorrows; in different shapes and colors it has moved and touched our hearts across vast stretches of time and space.

They can emerge from our unconscious at times when we need to make a change and influence us in profound ways.

In these times it is as if our psyche will enforce an image upon us, that we need to deal with in order to grow. The theme of death and rebirth seems at least to be intimately related to the phases in our lives when we are challenged to make a transition; when we need to leave behind an old form in order to enter into a new sphere of existence.

In these moments we have to let go of — or offer — an aspect of ourselves. Just like the snake sheds its old skin, we need to die in order to assume a new form. This is an act that been a most essential part of most native cultures for aeons. This transmutation of one form into another, is what the ritualistic act, as such, conceives.

Become aware of what you're unaware of

Whether in a brief moment of trance through dance, song or drum, a painful physical exhaustion, or a long excursion into the realms of Spirit, the ritual provides us with the cultural container in which we can experience a symbolic death and rebirth. In this dark light, my experience is neither unique nor special, and need not carry any messianic connotations with it. For neither Jesus nor Christianity can claim any exclusivity on the motif of death and resurrection.

Its roots run much deeper in the Western cultural heritage; they stretch through Greek mythology and its Mystery Cults Dionysian, Orphic, Eleusinian , all the way into ancient Egypt and the myth of Osiris. All I can say is that my dream had a strong and tangible effect on me. After that rainy night in the jungle, when it reappeared so forcefully, a change occurred in the way I related to the cave.

It had been a year since I finished my studies, and that had marked quite a significant change in my outer reality. On the inside though, I was still clinging to an old and familiar form.

I might have gone from student to teacher and from pupil to scholar, but looking back now I can see that I was still governed by the same dispositions, same patterns, and same inhibitions. I had to let go of the introvert scholar who observes life from a distance — who reads books about it — but never dares to fully participate in it. Surely, my rational mind was not the place from where I could perform this task. Rather, it was the main obstacle preventing the shift from occurring.

I needed to dig deeper if I wanted to make the transition into a new way of being in the world. Like the monk in the painting, I had to plunge myself into the sea of the unconscious, and let my scholarly — and to some extent monastic — sense of self dissolve. I had to cross the threshold.

Stan Grof: Journey into the Holo-deck of the Unconscious

In myths, fairytales, and folklore we often come across the threshold as a dark forest, a raging river, or a deep valley that the hero must cross in order to progress on the journey. But from a psychological perspective the threshold so often depicted as a physical point of crossing, is none other than the boundary within the psyche itself: It is the demarcation between our clear waking consciousness and the vast sea of the unconscious. What makes the descent so perilous is the fact that we — to some extent — let ourselves disintegrate by the powers of the Unconscious.

In its dark sea our stable sense of self begins to float and move; it begins to lose its outlines as the boundaries between self and other, inside and outside, become malleable.


This need not be problematic. On the contrary, it can be a deeply enriching experience as we get to incorporate hitherto excluded aspects of ourselves. But if we lose the boundaries of the self altogether, we risk becoming flooded by unconscious material. We need strength, stamina, and stability, not only to descend and dissolve, but also to re-emerge and reintegrate.

I regard myself as a sensitive person, and I know that the psyche is a delicate thing — not to be played around with frivolously. Just by being in a rather secluded spot in the jungle, I felt that the alchemical vessel of my psyche was already hot and cooking.

So I was nervous whether I could handle the extra heat. Was I pushing it too far? Or was it a deeper and more constructive drive to awaken and grow? It is indeed a fine line between having the necessary motivation and courage on our journey, and then becoming overly pushy.

If we are too careless we might risk burning out — or worse, severely damaging ourselves. For what lies buried beneath our fear and anxiety is our actual material for growth and transfiguration.

Perhaps it is all our crazy hopes and fantasies, our mad creativity and spontaneity? Perhaps it is our wild sensuality and lust, or maybe our fierce rage and anger? For it is only in the dark that we will be able to discover — and eventually recover — what we have been denying ourselves. As Joseph Campbell assures us:. The purpose of the descent as universally exemplified in the myth of the hero is to show that only in the region of danger watery abyss, cavern, forest, island, castle, etc.

From this perspective I could hardly have imagined a more ideal setting than a cave full of lizards. It had all the symbolic ingredients that I could have wished for: danger, darkness and descent, lizards, and animality — at one and the same time tomb and womb.

Most importantly though: It provided the space in which I could explore what I had been hiding from myself. Just like the painter needs a canvas in order to paint the images of his soul, so I needed a dark cave for the projections of my unconscious. As for the Maya, the cave became a portal to the underworld xibalba : a tunnel leading down into the world of my unconscious. It appeared as a necessary step, that I had to take, in order to individuate. Imaginably, it was somewhat of a drastic and dramatic way to do it, but sooner or later I would have been forced to deal with the contents of the Unconscious.

For some, it will manifest itself in sudden outbursts of uncontrollable emotions. In my case, it was in depressive moods, lack of drive, and an overly introverted approach to life. Whether it explodes or implodes, our shadow harbors an energy, that will eventually become destructive if it is not integrated. The unconscious will push us into situations, where we are forced to look at it.

As such, there seems to be a natural pull toward integration and growth in the psyche. Just like the acorn contains the seed to become a tree, so does our psyche contain a natural potential. And if we learn how to give form to this potential buried in our dark soil, we can grow to experience its full blossoming and actuality. This, Jung believed, is the overarching purpose of the dream matrix per se : to guide us on our journey toward individuation and wholeness.

It depicts a journey that we all go through as we unfold ourselves as individuals. It is a treasure map deeply inscribed in the collective unconscious — age-old and universal in its structure, but fresh and singular in every individual who gives birth and bones to it anew. When we nourish it — when we attend to its symbols and listen to its dreamy voice — then the treasure map of the hero can become alive in us.